Before I finally took the plunge (or, more accurately, the “Dip”), I had come a long way in my career. By that time, I had been teaching for 14 years, I had experience with adults, young learners and exam classes, and I had completed an MA with a focus on Educational Technology.

So, why did I feel the need to take the Trinity DipTESOL at all? To be honest, it was a course I had wanted to take for many years, but the opportunity was never there. I spent the majority of the early 2000s working at a private college in Turkey and the summer holidays were not long enough to take the intensive version of the course. Online options in those days were not extensively available either. Indeed, I opted for an MA as I was able to undertake the studies wholly online while continuing to teach full-time.

Enlightening as the MA was, I was conscious of the fact that it lacked a practical teaching component and many places (the British Council for example) would value a Trinity DipTESOL or Cambridge DELTA more highly. I was also aware that my MA had been quite specialised whereas the Trinity DipTESOL presented an opportunity to focus more widely on best teaching practices.  I had not been assessed on my teaching since my Trinity CertTESOL so I was keen to put myself to the test once again.

So, decision made, I now had to choose: Trinity DipTESOL or Cambridge DELTA? I opted for the former for two main reasons. I felt that the distance structure on offer (taking the input course online, and then attending a face-to-face course with assessed teaching practice) made more sense than the Cambridge DELTA (initial face-to-face course followed by assignments and assessed lessons spread over a period of time); and the explicit focus on pronunciation which the Trinity DipTESOL offered. This was an area of my teaching practice that I felt I had neglected over the years, so I was (apprehensively) keen on giving it a go.

Deciding where to take the course was easy. I had completed my Trinity CertTESOL at Oxford TEFL Barcelona many years before and had had a very positive experience. I recognised many of the tutors from articles I had read for my MA and from conferences and workshops I had attended so I knew I would be in good hands. The online phase draws on the expertise of tutors in multiple Oxford TEFL locations, so I received access to some of the best trainers in the business.

Having said all that, the course turned out to be incredibly demanding. The online phase was tough but enjoyable, similar in many ways to my online MA experience with the significant bonus of being able to put ideas into practice in the classroom immediately. The face-to-face component, on the other hand, was like a bucket of cold water in the face, especially when I was told that I had failed my mock observed lesson. I had not planned out the timings well, the language focus of the lesson overran and there was not enough time for the communicative outcome to be reached.

Thankfully, the tutors onsite were ready with structured criticism and tailored advice. I was able to pass my officially observed classes with better attention to detail in my planning and snappier transitions between activities.

The lessons were only one part of the assessment of course. There was also the phonology interview, which we were really well prepped for both in the online modules and the face-to-face component. I actually went into the interview confident and ready to present an activity I had designed myself focusing on sentence stress and weak forms, something I never would have done before the course.

The exam seemed to cause most stress among my colleagues on the course but again, we were well prepared for it with plenty of practice questions and strategies shared for giving effective answers. It was amazing and amusing how much of the advice is the same we would normally give our students (take 5 minutes to plan your answer, write a concise and direct introduction, etc) and it was an interesting experience to be in the position of a nervy student once again.

The part of the assessment that really had an influence on my work and career after the course, however, was the projects. I did action research into teachers using online communities as a self-driven CPD platform, very useful in encouraging my colleagues at the time in a remote school to engage more in professional development. I also experimented with using vocabulary notebooks in my own classes, encouraging students to record vocabulary they encountered outside the language classroom and recycle it in their own written work.

Most useful of all though was the ‘observation instrument’. At first it seemed quite a strange idea – I would have to design my own observation sheet focusing on a specific area and then observe a range of colleagues then writing an assignment based on the data. This ended up being a project that I found fascinating. I investigated seating patterns and was surprised to find teachers in my school rarely made any changes to the places where their students chose to sit. This in turn informed internal training sessions as we explored how we could utilise the classroom space better and create different dynamics suited to different activities.

This is an exercise I have repeated since. Upon starting a role as ICT Coordinator at a British Council centre (a job I would not have been considered for without the Trinity DipTESOL), I designed an observation sheet to collect data on how teachers used technology in their lessons, which again informed in-house training and highlighted opportunities for further investment.

I later took on a role as Head of EAL at an international school (a position for which my Trinity DipTESOL and MA earned me consideration) and again I designed an observation pro forma to record what language support strategies were being employed by mainstream subject teachers. This then allowed me to highlight best practice and make further recommendations rather than just rattle of a list of suggestions that were perhaps already being employed.

I now work as the EAL Coordinator at one of the UK’s top independent schools. While having an MA carries a lot of weight in this role, it is the classroom skills from my Trinity DipTESOL teaching practice, and the teacher training and development aspect of the action research projects that have equipped me to do an effective job. The Trinity DipTESOL takes pride of place among my qualifications, but it is the experience I had on the course with Oxford TEFL that truly made a difference in my career.

If you too would like to advance your career in ELT and learn from our expert team of tutors, apply now for your chance to join the course starting on October 7th 2019 or January 13th 2020. 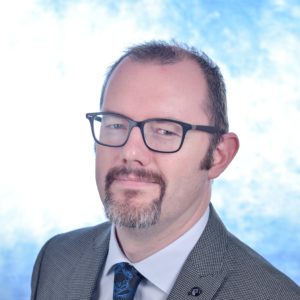 After 20 years of working abroad in Turkey, Gabon, Bahrain, and Kazakhstan, David Dodgson has now returned to the UK as the EAL Coordinator at Bedford School. In addition to the Trinity DipTESOL, he holds an MA from the University of Manchester, the TYLEC, and a Certificate in Academic Management. He also presents at conferences and webinars, and writes articles on teacher development. He is currently conducting research into developing academic English skills with secondary students.